In the summer, I wrote about my anticipation of sponsoring a renovated traffic circle garden. The drought-resistant ornamental plants and culinary herbs I had requested conjured up visions of stepping across an ocean to the south coast of France at a moment’s notice. “Fifi” was the name I assigned to the concept while I waited for the weather and the city crews to establish the new garden. 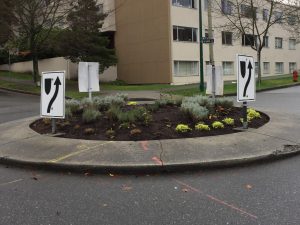 On November 15, city crews transformed the traffic circle garden from a jumbled mass to a fresh design. I spent a few sessions with a spade moving several of the plants around to create a more artful, welcoming feel, and added a couple of plants.

As I nestled parsley and sage near the rosemary and thyme that were part of the initial planting, I suddenly started to hum, “Are you going to Scarborough Fair”. I became curious about the Simon and Garfunkle song that I loved as a young woman and discovered it was originally written more than six centuries ago by minstrels in England. That’s where many of my ancestors originated.

Now I get why the original concept wasn’t sitting well with me. I don’t have a drop of French blood in my veins. I learned any French in my vocabulary in school, not at my mother’s knee. And a dog with an aristocratic name doesn’t work for a space that I hope some of my neighbours will help to tend and the whole community will enjoy.

So, my short trek to the garden will take me back in time instead of thousands of kilometres in eastward.

Anybody got a name for a friendly, mongrel pup with an old soul?