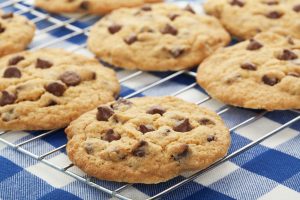 My son asked if I would like to bake cookies with my four-year-old granddaughter last Sunday afternoon. It was a fantastic idea. She often helps her mother bake. She loves Baking Day at her daycare.

She broke the eggs successfully by tapping them gently on the counter. She refrained from sampling the chocolate chips until she got one as a reward when we were finished baking. She noticed some flour and crumbs had landed on the floor where she had been working and asked for a broom. I could learn a thing or two from her.

“What would you like to do now?” I asked as our baking project wound up.

“Play the piano,” she replied without missing a beat.

I was delighted because I had already hunted up the Raffi Songbook I bought in the early ‘80s when my children were young.

I often get that book out when the grandkids come over but had an extra reason that day. Raffi spends most of his time in child advocacy work* now. I was going to hear him at a public lecture that evening and planned to take my songbook for him to autograph if I got an opportunity.

My granddaughter knew “Six Little Ducks” and “Must Be Santa.” She sat on my lap and pressed the keys as we played and sang together. She moved to a little rocker when I undertook to teach her, “If I Had a Dinosaur.” She loved the nonsense lyrics of the first two verses.

“If I had a dinosaur, just think what we could do.
He could lift me off the floor and take me to the zoo.

If I had a dinosaur, just think what we could see.
We could look inside the cloud above my balcony.”

I couldn’t believe my eyes when we got to the last verse.

“If I had a dinosaur, just think where we could go.
All the way to Grandma’s house to play her piano.”

We laughed heartily together about that one!

As he autographed the book, I thanked Raffi for writing that song. Almost 40 years later, it had created a lovely bonding moment across two generations.

Last Sunday, we made cookies. We made music and memories, too. You don’t have to ask me if I am glad I moved closer.